What can indirect evidence of a person’s existence such as tweets, a Facebook page, or texts tell us about a character?  What conclusions can we draw when describing that character?  Is our social media presence a true representation of who we are? How can that complicate how you reveal the character? 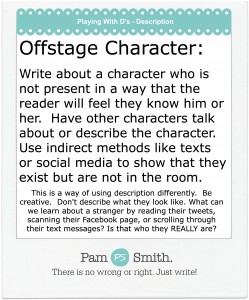 Posted in: Playing with D's,

I recently read an article referencing a study by Psychologist Marie Forgeard of the University of Pennsylvania that tackled the question of why adversity and ingenuity seem to go hand in hand. It’s clear that many authors and highly creative people have overcome adversity in their lives.  To give you a flavour of what I mean: […]