Imagine a contest in which the best pastry chef’s in the world compete for three insane days building chocolate and sugar sculptures and baking perfect pastries.  It sounds like a Food TV reality show, right?  Actually, it’s not. It’s the prestigious Meilleurs Ouvriers de France competition (Best Craftsmen in France) and it’s the dream of almost every French pastry chef.  Those who pass (there can be multiple winners) earn the privilege of wearing the iconic blue, white and red collar. For some, earning that collar can become an obsession. 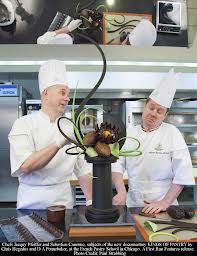 Meilleurs Ouvriers de France (MOF) is the basis of the documentary Kings of Pastry which follows chef Jacquy Pfeiffer, co-founder of Chicago’s French Pastry School, in his journey to participate in the competition.

*Spoiler Alert*: he doesn’t earn his collar.  At least not this time.  In the semi-finals, he was identified as the chef most ready to earn his collar.  So what went wrong in the finals?  He turned to other people to coach and prepare him.  Little by little, his own creations began to change.  The final entries that he presented no longer reflected his original inspiration and the judges noticed.  There simply wasn’t enough of him and his influence or style left by the time his creations made it to the judging.  The lesson?

Go ahead. Be yourself!

Be careful not to let your creative work be too influenced by others.  Often we start out wanting to write like an author we admire.  Have you ever thought: I want to be the next Hemingway (or the next Margaret Atwood or Alice Munroe)? Let it go.

Be the one and only–the very unique–YOU!  Write with your voice.  Write what YOU want to read.  If you try to write like someone else, you’ll lose the authenticity of your voice.  Your writing will be stiff and awkward. However, that doesn’t mean your work can’t be inspired by your favourite author.

Every artist or writer is influenced by others who are masters at their craft.  That’s to be expected.  To copy or imitate is to try to be the same as the writer you admire.  That’s where we can run into problems with authenticity…trying to be a carbon copy of someone we admire is not the path to fulfilling your creative spark. Taken too far, it can be plagiarism.

That’s where you will find your art.

There are many examples of writers being influenced by a short story they read and using it as a leaping off point to create an entirely new story in their own style and voice. It may be a particular story structure that they “stole” for the structure of their next work, or it may be something less tangible. It happens all the time.  Lesson 7 of Sarah Selecky’s Story Is A State of Mind gives very specific examples of influence connecting stories written by Zsuzsi Gartner & Amy Hempel as well as Lee Anderson and Rick Moody.

After your story is written, you also need to be mindful of influence and losing what makes the story uniquely yours if you submit your writing to a workshop.  Pay attention to feedback that is repetitive from those who review your work. That likely reflects something you need to fix.  However, if there is feedback from a reader that you disagree with, and it isn’t something the other readers raised as a concern, then move on.  Any ties go to the writer.  Remember the lesson learned by chef Jacquy Pfeiffer–don’t allow your colleagues to influence your story to the point that there is none of you and your voice as a writer left when the edits are done.

If you are having trouble starting a story, begin by picking out a favorite story by an author you love. Put your ideas on paper using that story as a structural base to get you moving.  Once the creative juices are flowing, you can move away from that story and let your own take you through the rest of the draft.

Let me know what happens in the comments below.

I recently read an article referencing a study by Psychologist Marie Forgeard of the University of Pennsylvania that tackled the question of why adversity and ingenuity seem to go hand in hand. It’s clear that many authors and highly creative people have overcome adversity in their lives.  To give you a flavour of what I mean: […]